While reading through my RSS news feeds, it occurred to me that there was a bumper crop of plausible band names in the headlines. For example:


And that's just from a quick pass at this morning's news!

Boeing 787 Dreamliner Situation: Summary of what you want to know


Some fifty airplanes had been delivered into service, with the majority of these being non-US carriers such as the two Japanese carriers JAL and ANA. United Airlines has taken delivery of 6 planes.

The reason for the grounding is at least two unexplained fires in on-board batteries. The Japanese carriers had decided to ground their fleets as a precaution and the US Federal Aviation Administration (FAA) made it official with the issuance of a mandatory airworthiness directive (AD). ADs typically identify a potentially hazardous condition, state a required corrective action(s), and give a time limit for implementing the corrective measures. What's unusual in the B787 case is that the fleet was ordered grounded immediately (indicative of the perceived seriousness of the problem -- ADs usually give a deadline for making a fix stated in terms of a date, number of takeoffs, or number of flight hours), and no fix has been identified. This means that more than $10 billion worth of brand new airliners are stuck on the ground for an indefinite duration. This is a financial burden for Boeing and the carriers.

It is expected that new airliners experience problems upon introduction into revenue-generating service. The Airbus 380 had some in-flight engine failures and cracks in wing structures. These were resolved relatively quickly. At the dawn of the commercial jet age, the revolutionary De Havilland Comet suffered multiple inexplicable losses where airplanes just seemed to fall out of the sky. Investigation finally revealed metal fatigue due to repeated and rapid pressurization cycles as the culprit. The industry learned a new fact of life for the jet age but the Comet was was swept aside. Ironically, its failure left open the path to domination of the commercial jet market by the Boeing 707 and its progeny.

The 787 experienced some initial problems including fuel leaks, cracked windshields, and computer system glitches in the braking system, as well as the battery failures. The other problems were viewed as correctable; the grounding is solely concerned with the battery issues.

Two lithium-ion batteries in different systems overheated and vented flammable electrolyte outside their cases. Obviously, this is not supposed to happen and several design features are intended to prevent such occurrences. The battery failures and fires could conceivably have resulted in:


Why this happened is as yet unknown, but flight data recorder evidence indicates that there was no overcharging/overvoltage condition. 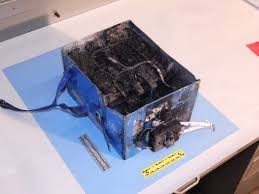 Why the B787 is different


Designed for maximum fuel efficiency, the Dreamliner uses electrical systems to do things that other airliners use pneumatic and/or hydraulic systems for, among them: climate control, pressurization, engine starting, anti-icing, and braking. This eliminates the weight and routing complexity of considerable pneumatic ducts and tubing as well as hydraulic plumbing and equipment, and does away with the parasitic and "stand-by" losses that the conventional systems impose.

To make this all work properly, the Dreamliner is equipped with several sets of Lithium-ion batteries, the first such application in a widebody airliner.

The 787 also marks the first use of a composite primary structure in place of a conventional aluminum fuselage and wing.

What's different about the batteries?


Lithium-ion batteries have been known to overheat and to vent hot toxic and flammable electrolyte if they are abusively overcharged, or if they are discharged faster than they were designed for (as in the case of external short). Physical damage or manufacturing defects within the battery can produce internal shorts that give rise to "thermal runaway". This is where the cell generates more heat as it gets hotter in response to a short in a cycle that can ignite the electrolyte, other battery materials, and surrounding materials.

The 787 design team selected the Lithium-ion batteries due to their lower weight and smaller volume as compared to other chemistries.


The FAA, National Transportation Safety Board (NTSB), Boeing, and its subcontractor/vendor team must continue their investigation and analysis of the battery problems. GS Yuasa in Japan is the supplier of the 787 Li-ion batteries. The avionics system associated with the batteries and electrical supply were designed by Thales SA of France. Once a credible failure mode has been defined and verified by test, a fix can be devised. This can be an operational or periodic maintenance approach, reprogramming of devices that determine and regulate the battery state of charge and discharge/recharge rates, replacement of the batteries, or replacement of other equipment aboard the jet. The problem right now is, without an obvious suspect for the failure, it is impossible to determine what steps will be required, how much time they will take, and how much it all will cost.

One area certain to be examined in detail is the adequacy of the 787's fire detection and suppression system. It is possible that the Halon-based system that has been so successful in previous generations of aircraft (or at least the way it is currently designed) is not effective in combating Li-ion battery fires, either in knocking down the initial fire or in preventing subsequent events driven by thermal runaway.

If the Yuasa battery is found to be at fault, the Boeing team might revise the quality and inspection requirements for the batteries and the cells that comprise them, pursue a redesign, or source replacement Li-ion batteries from an alternate supplier such as Saft. It is also possible that a more conventional and proven (in the airline flight environment) battery chemistry could be selected to replace the Li-ion batteries.

Any and all of these options would entail recertification of the 787 with the proposed modification. Changes to battery construction or chemistry would likely affect the energy density and packaging of the battery. This in turn might alter the capabilities and operating costs of the aircraft.


The 787 Dreamliner is no doubt a technological tour de force. A valid question is, "have the technology and the methods by which this airplane (and others to follow it) was designed, built, and certified outpaced our abilities to evaluate the design, understand and mitigate risks, and manage the overall program?" A few examples:

Some interesting reading that I recommend highly: